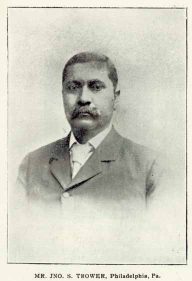 John S. Trower was born in 1849 in Eastville, Virginia to parents of Black, indigenous and white ancestry.  As a young man looking to expand his career and business opportunities, he moved to Baltimore where he worked as an oyster shucker.  He was able to save money and in 1872 head further north to settle in the bustling and prosperous Germantown neighborhood. Here, Trower opened a restaurant, hotel and catering business on East Chelten Avenue directly opposite the busy new freight and passenger Germantown depot of the Reading Railroad (now the Chestnut Hill East commuter rail line). The decision to open his business at this location on East Chelten Avenue likely contributed very significantly to Trower’s immediate success in Germantown

In 1888 he purchased the former Germantown Savings Fund building at 5706 Germantown Avenue, expanded his business into a dining establishment, on-site bakery and ice cream plant, and large catering operation.  He grew the multifaceted enterprise to one of the largest of its kind in the country, with clients not just in Philadelphia but throughout the Mid-Atlantic region.  Trower also became a successful real estate investor, owning many properties in Germantown as well as in Ocean City, New Jersey.

Trower died in Philadelphia on April 4, 1911, at the age of 61. At his death, Trower’s net worth placed him among the wealthiest African Americans of his generation.  In addition to his success in business, Trower was a noted philanthropist. The beneficiary of the largest share of Trower’s philanthropy was the First African Baptist Church of Philadelphia, followed by the Mt. Zion Baptist Church of Germantown and the Downingtown Industrial and Agricultural School. Mt. Zion Baptist Church is located on West Rittenhouse Street in Germantown and the site and campus of the Downingtown Industrial school is now the Downingtown Campus of the Delaware County Community College, located along U.S. Route 322 (Horseshoe Pike) about two miles northwest of the Borough of Downingtown. 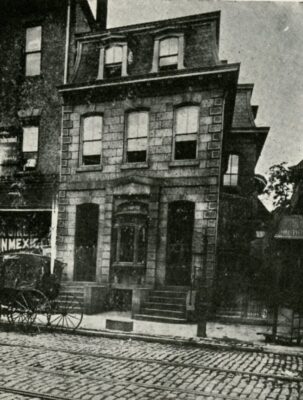 Historic Germantown is committed to finding, preserving, and sharing stories like these- that speak to the richness and diversity of our community. This GIVING TUESDAY we are launching a campaign to fund the  fabrication and installation of a Pennsylvania Historical Marker near the John Trower Building  (currently The Crab House restaurant) to recognize this community leader and his contribution to the neighborhood, and to make sure that we can continue to tell the stories of the people of Germantown for years to come. This project is a partnership of Historic Germantown, Germantown United CDC, The Black Writers Museum, and The Keeping Society. In addition to placing a Pennsylvania Historical Marker on Germantown Avenue at the site of Trower’s restaurant and catering businesses, we will be launching other initiatives this coming year celebrating Trower and black entrepreneurship in Philadelphia.

To donate, use the button below

GivingTuesday is a global generosity movement unleashing the power of people and organizations to transform their communities and the world.

GivingTuesday was created in 2012 as a simple idea: a day that encourages people to do good. Over the past seven years, it has grown into a global movement that inspires hundreds of millions of people to give, collaborate, and celebrate generosity. LEARN MORE

X
We use cookies to ensure that we give you the best experience on our website. If you continue to use this site we will assume that you are happy with it.Ok